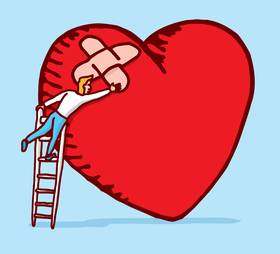 A time to forgive?

Not a bad ex its not!

Some people break up just to make up. You tell yourself its over - that you'll never go back again. And then somehow, next thing you know you're back together. Some couples are better of broken up.

To figure out if you're better off writing the relationship off check out the pointers below:

Maybe she was a drinker. Maybe he treated your friends badly or was spoilt. Whatever it was about them that annoyed you - chances are it hasn't changed since you decided to end things. So if you decide to take them back - do it knowing that they probably haven't changed all that much.

Very few couples who break up and make up last.

The fights usually get worse, mostly because you learn that nothing's changed. The old grudges are still there, the reason you decided to break-up in the first place still lingers.

If the reason you broke up was because they betrayed your trust in some way, then you'll likely spend expecting them to break it again. This may result in your trying to control who they hang out with and when they go out... just one more fight waiting to happen.

Your relationship may jeopardise your friendships.

Chances are that whenever you were going through tough times, you both shared what was happening with your friends and family. Meaning that your friends don't have such a great opinion about your partner - nor do their friends about you. When you decide to get together again they'll be disapproving - which will put a strain on your relationship.

It's called a break-up because it's broken - truer words have not been said. Guys, it's not just the ladies who struggle with knowing when to let go, sometimes you hold onto a relationship way past its expiry date. Did you take your ex back only to regret it? Tell us below.

Do you know what good love is? Read more about it below.